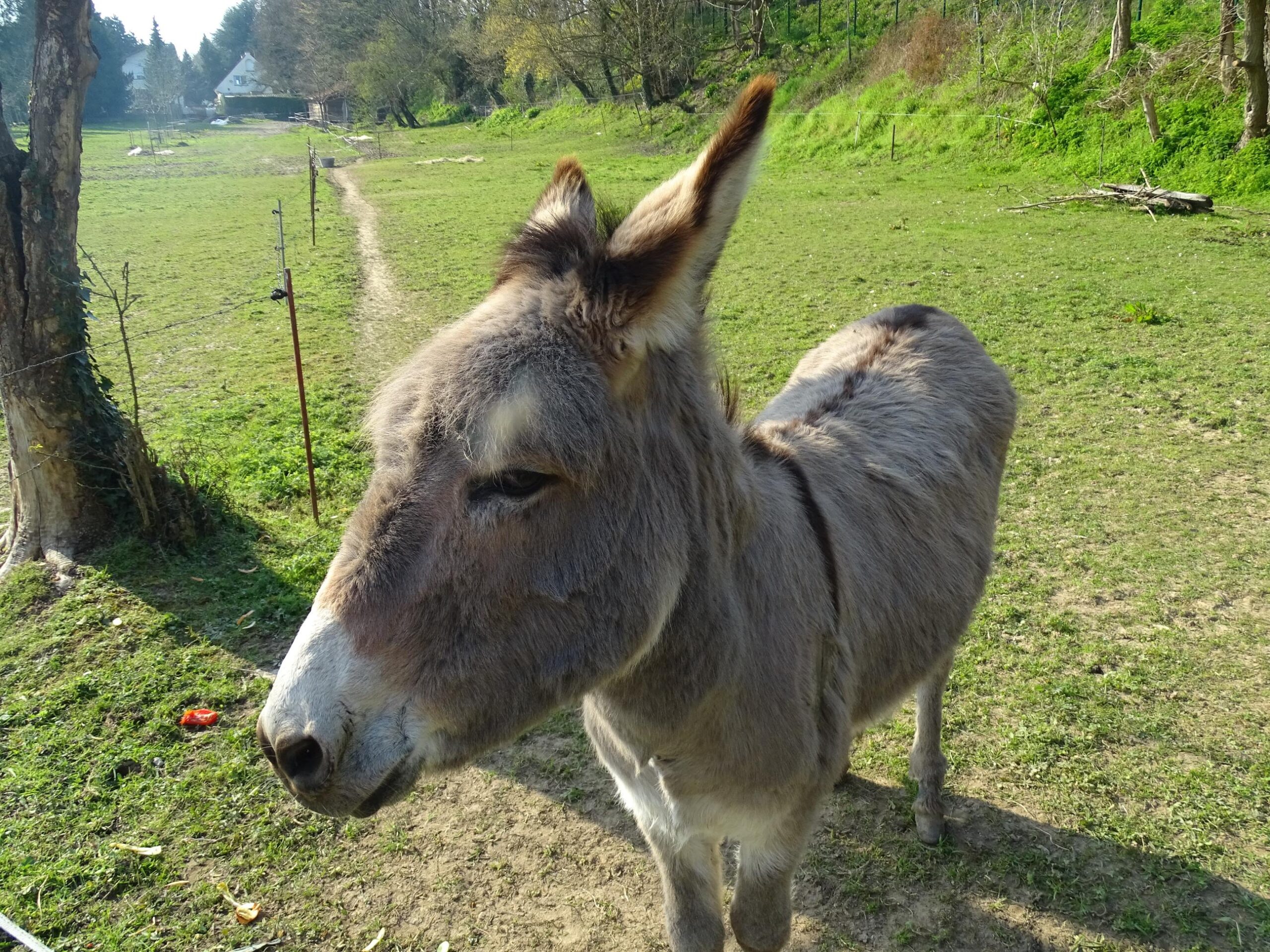 An aggressive donkey can be scary and off-putting. Having one on your farm or ranch has lots of drawbacks. So it’s important you address the topic!

Donkeys can show aggression by snorting, kicking out with their hooves and facing up to perceived threats square on. Sometimes they’ll attempt to pick things up and shake them. It’s often unpredictable exactly what they’ll do.

As a new owner this behavior can be intimidating or worrying. You want to stop it but you don’t know how…

So that’s what this article aims to discuss.

In it you’ll learn:

I’ve spent hundreds of hours researching donkeys and reading about their behaviour. The topic of aggression is one I’ve wanted to talk about for a while!

How Donkeys Can Act Aggressively

There are several scenarios donkeys have been observed acting angrily or aggressive. Common ones include:

Even though it’s rare, donkeys have also been known to kill, shake or stomp other animals.

But most, it has to be said, are usually very happy being kept with non-threatening animals.

Why Do Donkeys Sometimes Act Aggressive?

Often these responses can be put down to fear, frustration or boredom. Other times they can be in direct response to hormones.

Sometimes there may not be any obvious reason.

Even though they’re domesticated you can never fully predict their behavior.

How To Deal With An Aggressive Donkey

Dealing with an aggressive donkey is never particularly nice. But there are a few things you can do to help curb their behavior.

A last resort would be re-homing. Obviously, you’ll only want to do this if you feel you’ve exhausted all options. But sometimes it can be necessary.

Especially if your donkey poses a threat to your other animals (or worse, people).

Hopefully trying some of the things above can make a big change.

Are Some Donkeys Born Aggressive?

Donkeys don’t tend to be born with aggressive tendencies. Most foals are gentle and calm, urging on the side of timid. Aggression tends to come later, around the time of sexual maturity.

The disposition of the animal is something most donkey breeders hold in high regard. That’s why they select herdsires (fathers) and jennets (mothers) very carefully.

Temperament is everything in a donkey but it’s very hard to predict from birth. The more care you take in their growth and development, the better they’ll tend to behave. But there are always exceptions.

Male donkeys are often more aggressive than females. Kept alone without company – especially after reaching sexual maturity (between 8 months and 1 year [1]) – this can become even more apparent.

Of course that’s not to say female donkeys can’t act similarly. Those with newly born foals can get very protective.

The truth is that aggression is mostly donkey dependent. Donkeys with a history of abuse (of either sex) can fall into this category. While even those brought up with excellent care can sometimes act the same.

What Breed Of Donkey Is The Most Aggressive?

There’s no one breed of donkey that’s reported to be more aggressive than any other. For the most part, behavior is standard. Miniature donkeys can sometimes be just as aggressive than regular or mammoth’s in this regard.

To help stop the behavior the same rules apply.

How Can You Tell If A Donkey Is Angry?

You can tell if a donkey is angry the same way you can tell it’s being aggressive. The signs are very similar; kicking or shuffling, violent head shaking etc.

Even though donkeys are a lot more stoical and less expressive than horses, you can usually tell an angry one.

The signs are much more apparent than a happy or content one.

Donkeys very rarely attack humans. Those that do are usually acting out of fear. Perhaps they’ve been abused or struck by humans in the past and associate them with pain.

An aggressive donkey can be unpredictable though. If they’ve been displaying destructive behavior with other livestock on a farm or ranch, it’s generally a good idea to keep them away from people.

Especially small children who a donkey could easily overpower and cause harm to.

My Donkey Is Showing It’s Teeth, Will It Bite Me?

A donkey showing it’s teeth is very rarely a sign it’s about to bite you. Actually it’s most often something of a natural instinct.

Related: Why Do Donkeys Show Their Teeth (6 Important Reasons)

It’s not something you should worry about.

Aggressive acting donkeys, although rare, do need to be taken seriously. Learning how to spot the signs – as well as what you can do about them – can help keep your farm in order.