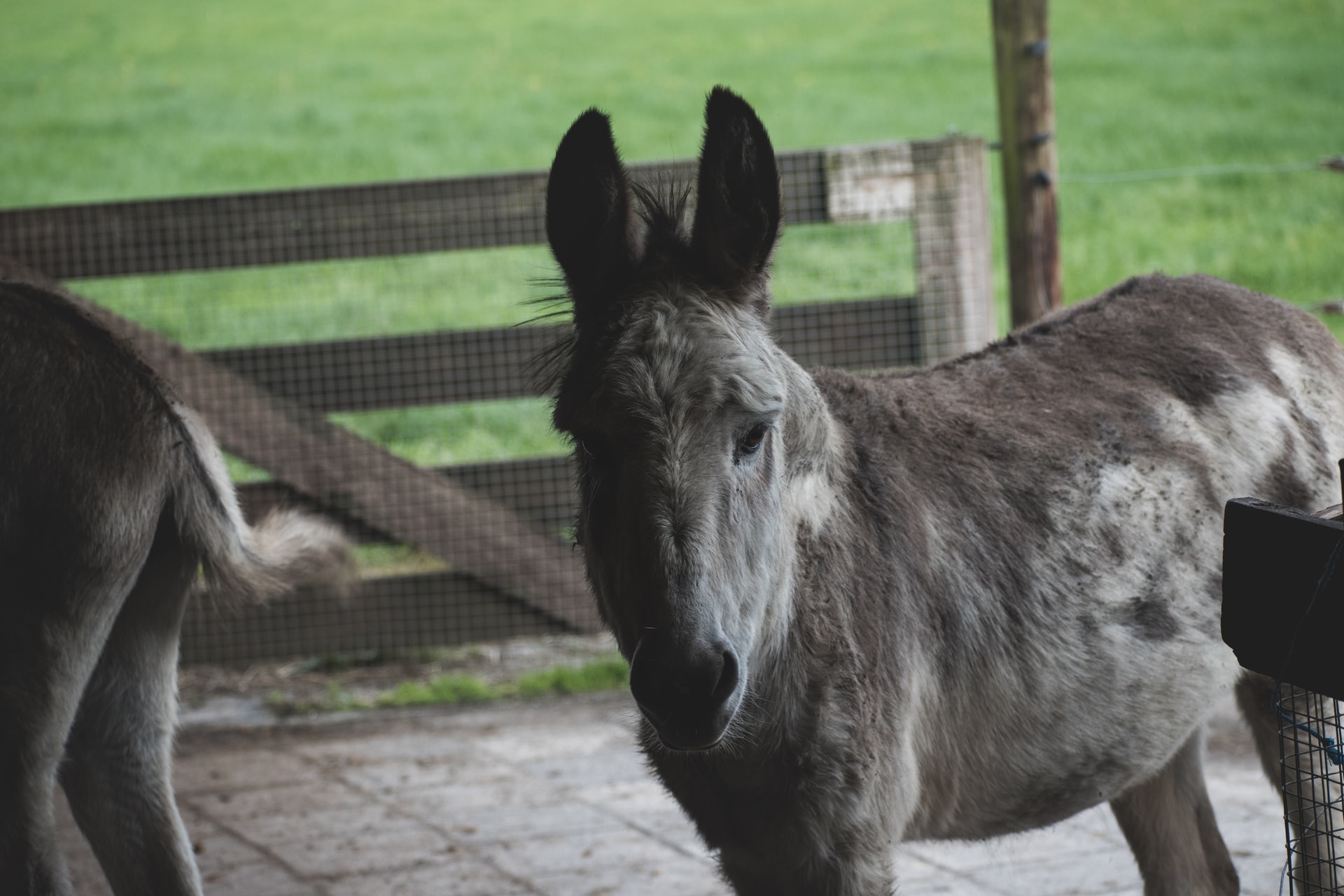 Thinking about getting a pet donkey but heard they can be pretty mean? Understandable. If you’ve got small children or plan on showing your animal off to the public, that could be a problem.

But are they actually mean?

No, donkeys aren’t usually mean. Instead they’re usually affectionate. The animals’ disposition is dependent on both nature and nurture. In the wild they’re known to be calm and placid.

Yet of course there are exceptions and as a potential buyer (or someone interested) you probably want to know what these are.

So here’s what we’ll cover:

I’ve spent hundreds of hours researching donkeys and am always keen on sharing what I’ve learned!

Ready to get started?

How Mean Are Donkeys?

Most donkeys aren’t very mean. Those that are though can range from mean most of the time to mean only on occasion. Donkeys experience moods much in the same way as other animals.

How far their mean moods go is entirely case dependent. Even though they might be domesticated they can still be unpredictable.

Here’s a couple of things a donkey’s “meanness” can depend on:

Sometimes it could all be about hormones and sexual development too. Jacks are known to be quite aggressive during this period.

Related: How Do Donkeys Show Aggression? (What You Can Do About It)

The major ways a donkey may act mean include:

Of course all donkeys act differently and not all of these signs will be so obvious.

Also even the sweetest, mildest mannered donkeys are prone to temper tantrums on occasion.

Donkeys very rarely attack humans. They don’t see them as natural predators or something to be particularly scared of. Most of the time they associate humans with receving food and care.

This is mainly true of farm or ranch donkeys of course. Wild ones (or those left alone due to neglect), are a lot more unpredictable.

But rather than attacking humans, they’re much more prone to walk or run away.

Do Donkeys Attack Other Animals?

Attacking other animals, with malice, is quite a rare thing for donkeys to do. Usually those kept close to other livestock, especially animals they live on a farm or ranch with, will often form strong bonds with others.

This is one of the main reasons they have good reputations as guardians.

Sure, there are reports of some donkey owners claiming their animal is deliberately injuring (or even killing) smaller ones they find close, but these reports are generally rare.

The stories of ungelded jacks caught throwing, shaking or stomping on things like ducks, geese and chickens? Not something you’ll hear often about donkeys, that’s for sure.

Donkeys tend to defend themselves from things like coyotes where possible.

Related: Do Donkeys Keep Coyotes Away (6 Things You Need To Know)

One perception of a mean donkey is that it often bites.

Although this can be true of some donkeys, it’s not that usual. Most of the time donkeys bite by accident. When taking food from your hand or playing with each other.

Why Are Some Donkeys Mean?

Donkeys may be percieved as mean for different reasons.

But what’s also important to mention here is unfairness.

Giving a donkey a “mean” label can also be pretty subjective.

Experienced donkey owners (especially those who’ve spent many years raising and caring for them) could argue that what a beginner feels is a mean donkey is actually a very normal one.

Especially if the “signs” of their mean behavior are rare.

How Can I Improve My Donkey’s Mood?

You can improve your donkey’s mood by ensuring their needs are met. Do your best in the following ways:

Our donkey care guides have a lot of great tips in answer to this question.

How To Deal With A Mean Donkey

The best way to deal with a mean donkey is to try and be firm but fair. Don’t let their behavior dominate you and show that you’re the boss.

But don’t be overly aggressive or punish your donkey with violence or force. That’s only likely to have adverse effects. And make them even meaner.

If you feel you can’t get a hold on their behavior and they keep acting out, then contact a vet.

There could be some underlying problem causing them to act mean that you can’t spot.

Mules seem to have more of a reputation of being mean than donkeys. The truth is however that the two species are pretty comparable. Usuall they act mean in similar ways for lots of the same reasons.

A mean mule could be more of a threat to people though. That’s because they tend to be bigger and stronger than the average donkey.

Although the average donkey is often pretty friendly, there are circumstances (and individuals) they can be a little testy.

But those raised and cared for rightly generally behave well.