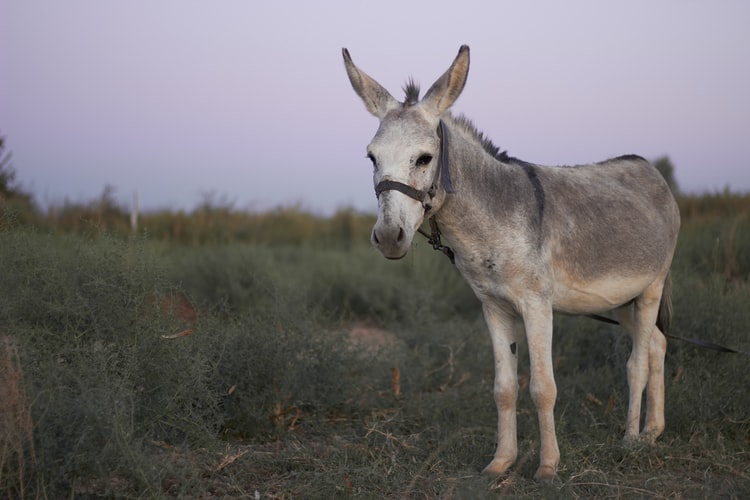 Donkeys are big fans of celery. So much so that consuming this crunchy vegetable is something they’ll actively look forward to. The fact it’s high in Vitamin K? An extra bonus too. Especially for a donkey’s blood circulation.

Health Benefits of Celery for a Donkey

As a part of the apiaceae family, celery is in the same family as carrots and parsnips. Famously known to humans as a low calorie snack, donkeys can benefit from it too. And not only because it’s cooling and watery in the hot summer months.

According to Medical News Today, celery has plenty of nutritional advantages:

Apigenin – This is a pigment found in plants reported in a 2016 study to induce apoptosis in inflamed cells and therefore reduce cancer risk in humans and animals.

Apigenin is also reported to be good for the brain. So could improve your donkey’s cognitive functioning too.

Fiber – The good quantities of fiber in celery make it good for the digestive system. There are also some reports that fiber can help better regulate blood pressure also.

Antioxidants – Celery is well-known for its high water and antioxidant content. Especially in compounds like selinene and limonene. This can help donkey’s fight infections and stay healthy.

How Should You Feed a Donkey Celery?

Donkey’s can eat celery raw with no problems. But you can also give it to them cooked; whether steamed or boiled and they’ll probably enjoy it just as much too.

The best way to feed a donkey celery is either directly by hand or place cuttings into their feeding tray. Donkeys aren’t particularly bothered how they get the vegetable but it can be a nice treat for them mixed up in straw or hay.

Another good way to serve up celery to a donkey could be with sugar beets or succulent plants too.

Obviously keep an eye on how much your donkey is consuming too. And make sure they eat under 2% of their body-weight in food so as to avoid becoming overweight (although due to the caloric deficit in celery this shouldn’t be too much of a problem).

What Should You Not Feed Donkey’s?

Donkey’s can eat varied diets and many donkey owners will feed theirs different things. Generally though you want to stick to plant-based foods. Specifically ones that are grass-based.

Other members of the vegetable family, especially those from the brassica family (onions, leeks, garlic etc) should never be fed to donkeys. These are toxic to the animals. And could cause serious problems to their liver and other vital organs.

Fruits should be kept in minimum proportions (although safe) as the high sugar content can cause donkey’s to put on unnecessary weight.

What Do Donkey’s Eat in the Wild?

In the wild donkey’s graze on fields and pastures taking in grass and other plant-based foods. Generally they consume these in small amounts too and have a good sense of when they’re full. But this mainly because of the seasonal growth rates of plants and grass.

If it’s available to them donkeys will also eat desert plants and shrubs. They eat it by pulling the plants into their mouths with their lips instead of their teeth. Ripping it and grinding it down afterwards. Then using their flat teeth.

When donkey’s aren’t in the wild the amount of food available to them, especially grass and hay, should be restricted to stop them becoming overweight. This is why you’ll find experienced farmers cutting away the grass available to them. As well as removing any extra hay bales they might have access too.

Interestingly, donkey’s are known to be able to go without food for several days without experiencing any upset. This can be a common occurrence in arid climates where rainfall is low but obviously occurs less on your standard farm.

Granted you’re treating them well of course! Which given their gentle and loving nature, you always should.

Hopefully this article can convince you that feeding celery to your donkeys isn’t likely to do them any damage in the long-run. If anything it’s a nice treat packed with lots of health benefits for them also.